Well, that didn't quite go as planned.

Clearly my intent to return to posting in a reasonable fashion after the last journal entry didn't materialize... it's been quite an exhausting summer. There's no need to go into detail beyond my Father is doing well but otherwise still has memory/dementia issues that can be rather time consuming depending. Unfortunately and most sadly, there was additionally the passing of my Aunt (on my Mom's side) in July which really has consumed much of what remained of summer. Since her passing I have been helping my Mom sort out her estate so that has taken quite a lot of time and is still ongoing. As I noted in the previous post, family first when your faced with things like this, the art and work will always be there if, and when, I want it to later. All said things are going as well as can be expected. Now with a modicum of calm beginning to settle in it's time I can finally get some of that work that's been backing up posted.

How it this will go will be pretty simple; stuff will drop when it drops but expect stuff to show up for sure, there's actually a lot considering how chaotic the last couple years have been (I just have to sort though all of it). I did manage to work when I could make the time because it's always relaxing to just sit down and do what I love to do; create stuff. The Theos project isn't dead, it just had a little break, new work will materialize as I can get to it and all along with blog posts, etc. I did say new stuff would be coming this year it just ended up a bit later than planned. In fact, head over to our Deviant art gallery for some new stuffs of the day, like now and stuff (stuff example below). 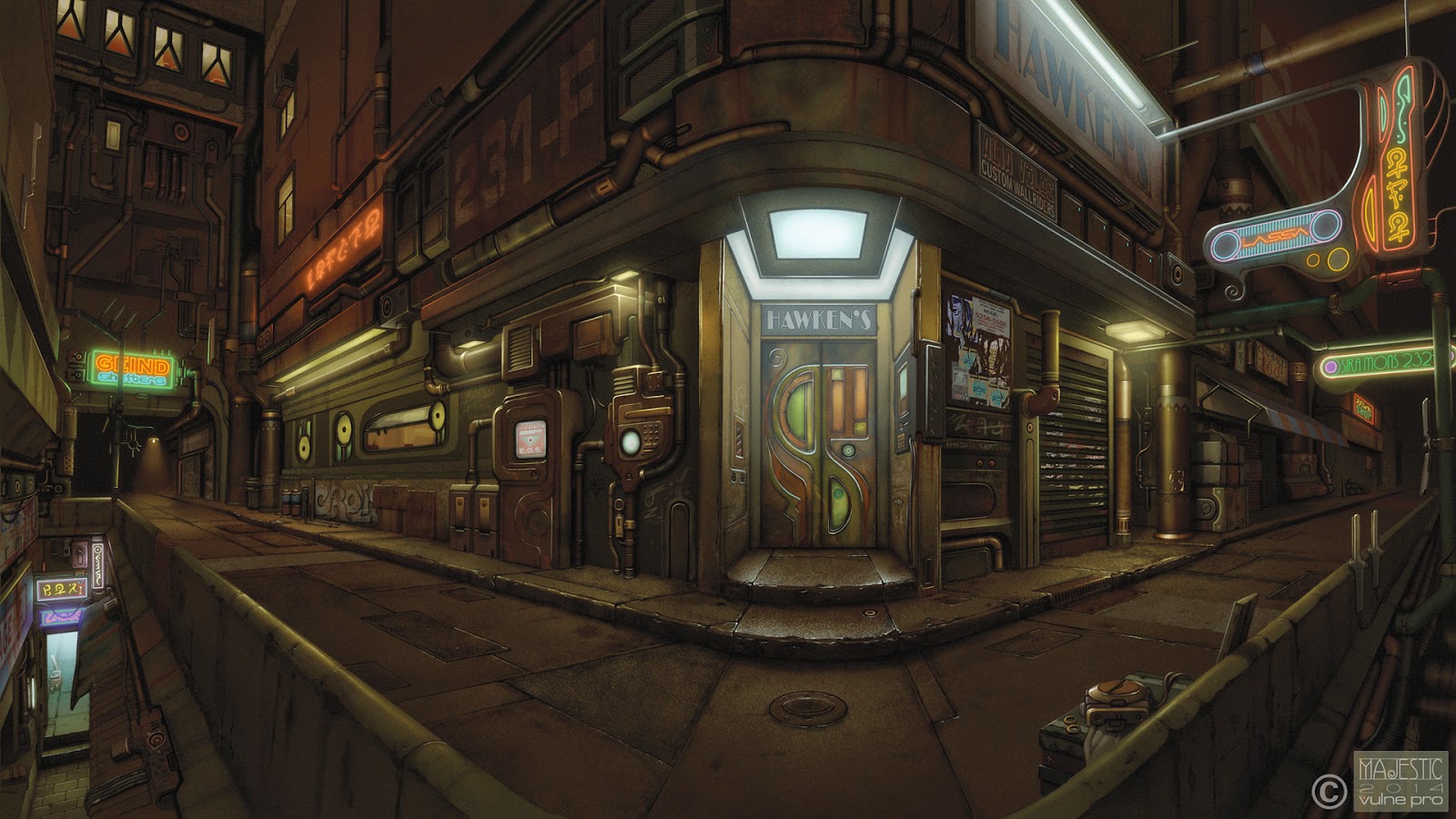 This post has been pending for awhile now, it's simply been a matter of finding the time to sit down and compose it, post, and cross-post it.

A year of dead zone for updates here and no new works since July 1st on Deviant Art, where be the arts, where be the Vulne 'o' Pros dudes?  I have posted about this in the past and, again, I'm dropping an update to give a somewhat brief overview of what I've been up to; taking care of my Father as he embarked on 'The Magical Medical Mystery Tour part 2 Electric Boogaloo'. Yes, the latter half of 2013 was pretty busy with the lead up to another surgery, left carotid artery (70% stenosis) endarterectomy. His surgery was last month (the 22nd) and, once again, went well (he had a great surgeon, the same as in 2011) save one complication... he had some cognitive impairment that led to an extended stay hospital inpatient (normally you're discharged in 24 hours for this procedure) and additional extended care/physical therapy for 21 days. His surgeon was not completely sure if he had a TIA (mini stroke) or possible anesthesia hold over, however he was very positive that my Father would recover cognitively pretty quickly though and we'll get to that. So it's been a lot of driving back and forth for pre-op appointments, hospital and extended care visits and making sure he was doing well, etc, etc, etc.

This is the gist of it.

I have no intention to post endlessly (as I echoed the last time I posted updates of this kind in 2011) about all this because I was never big on the whole "tell everyone what you're doing 24/7 social media phenomenon" (not to denigrate anyone else from doing so) and, also, it would just be exhausting to post about it with regularity. I care deeply about how my Father is doing otherwise I wouldn't be doing all I have to make sure he comes though all this but I'd rather post about the work you've all been following than an endless drone about this. It hasn't been some kind of non-stop terrible experience anyway (ups and downs sure but things have, for the most part, been significantly better than they could). Being it's not terribly fun to post about this kind of stuff  I'd rather just do overview updates when it seems I should so here we are. I would have liked to get to it sooner but there simply hasn't been the time.

My Father was discharged from extended care Tuesday, the 18th, and is now home. The assessment was he would have a lot of issues with basic tasks such as going to the bathroom but I was never sure if I completely saw that was an absolute certainty. It seems I was right because once he got home he has somewhat fallen back into his routine (he is able to get around on his own but I keep an eye on him as he's still not 100%) and the first thing he did was use the bathroom all on his own, no problems (the door was open so I could make sure he was alright). He also has some home care for a time to additionally help but he seems like he needs it less than expected (pretty much all he has for Family to help is myself and his brother who lives up north of us in Davidson MI). It's typically better for a patient with any degree of dementia or memory issues to be at home in a familiar environment so hopefully the trend will be his returning to a comfort zone of routine. It's too soon to tell how things will be but it's looking like he'll be back to his old self or enough so that he'll be reasonably self reliant. None the less I still watch him like a hawk but I'm seeing that's he's adapting to the familiar home environment quickly.

Obviously, this is why there hasn't been any new works or posts for some time. Although it's been a hectic time I actually have been reasonably productive considering what I just reported. Last year I had been involved in a live action pitch project that may or may not see the light of day and I had continued to work on TKP materials whenever there was any time to do so.  Indeed there's a bit of a significant pile of TKP works waiting to be posted, it's just a matter of getting around to all of it (actually a peek at some of that work was previewed on my Facebook page, now one here below, and you can expect to see more soon here and on the Deviant art gallery). We'll see how the landscape looks as things settle down for my Father but I expect I'll be able to get back to posting and sharing new works soon. The image below is background layout in pencil with additional digital gray scale tones in CS3. 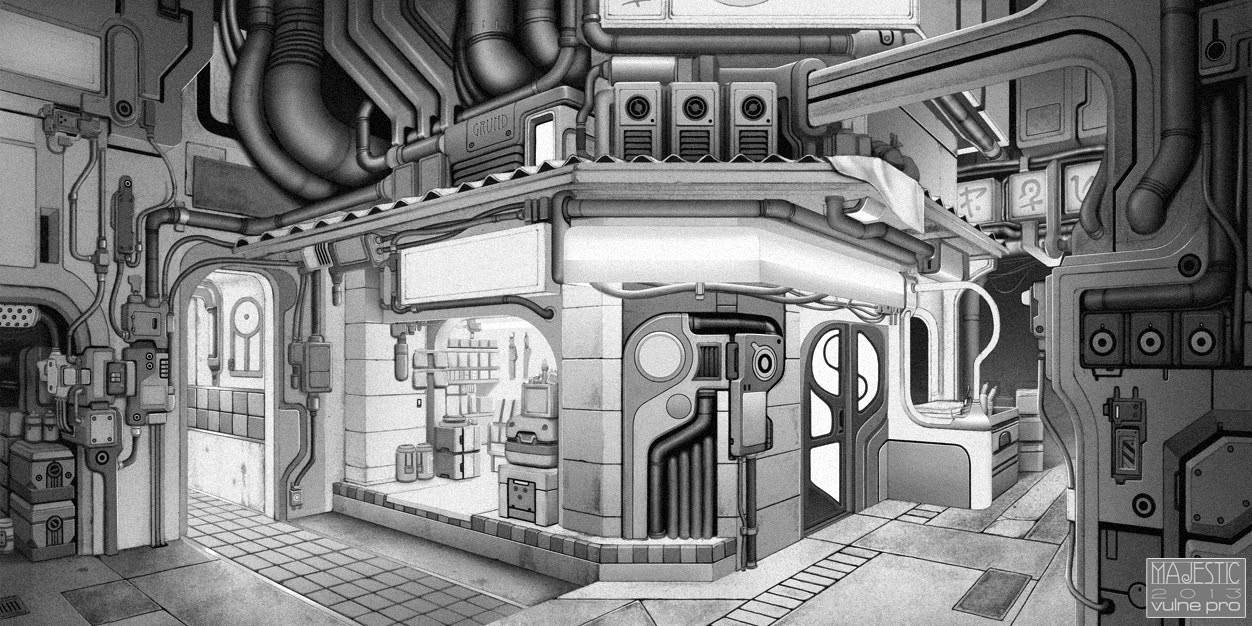 I don't mind sharing this overview of what's going on but unless things go south any future updates on My Father will be likely brief and hopefully positive. We certainly do appreciate any well wishes but I'm not actively seeking sympathy, we're doing well and the best we can. Again it's gone pretty well considering. As always I deeply appreciate the interest in Vulne Pro's works and Theos project. Any comments, Deviant notes, email, etc that were unanswered now you understand it wasn't willful ignoring of anyone on my part. I'll see if I can get to some replies to those comments as I can.

Thank you everyone and you should most likely see some new stuff this year so stay tuned!