It's time to drop in a quick update to break the silence thus far this year. I've found myself very busy, and thoroughly engrossed, studying the seemingly limitless potential of Zbrush for exploring our designs in the virtual 3rd dimension.  I had learned a good deal of 3D (Maya, 3D StudioMax, Zbrush, Sketchup, etc) in 2007 during my time working on animation pitches and studio development. However, both a hard drive failure and a flood of illustration contract work caused me to shelve the 3D up until now. With a new year somewhat more stable than last year's chaos, it's time to return to 3D and my personal favorite app, Zbrush. I worried I would have forgotten all I had learned but, to my pleasant surprise I found myself recalling a good deal more than I had expected I would.

Nick, Karl, and I are also cooking up some ideas for our plans for this year so, though things have been quiet so far, don't expect that to last long. For now, here's a peek at just a few of my early Zbrush explorations. 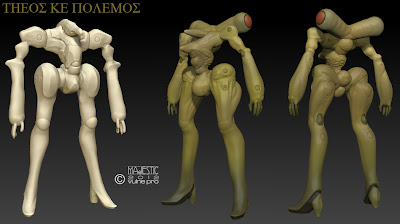 These are just sculpting doodle roughs, my reacquainting with the tools and process. None of these FOIL sculpts are what I would call working meshes, just part of the process of learning/relearning (though they came along further than I expected and things are moving rather quickly forward). They likely will be used as potential Photoshop repaints, a lot of possibilities even in the early doodles. I can foresee a lot of potential in what we can do here but we can get into that later. This is just a peek at early explorations so there certainly will be more as my knowledge of the program continues to grow. So far so good.

Cheers!
Posted by Vulnepro at 7:45 PM

They look cool, Mike. Have you considered working up some of your Theos environments in CG?

Absolutely ;) I don't think I'm quite there... yet, but, you bet, I'm working on it. I can see doing a lot of things in 3D and, as you know, it's an incredibly valuable skill to learn.

I'm working away on it and having quite a blast doing so. I'll keep posting peeks as those bridges are crossed.