Welcome to Genuaä
OK, time to get back to dropping some new TKP posts here. The past month has been busy with some internal studio related freelance but now it's time to get back to work on Theos KE Polemos material.
Continuing from where my last post left off here's another look at some background art for the Theos KE Polemos: Badan Song project. This would be a shot within the Nasford district in the political bloc of Genuaä. Nasford, though located in the relatively populated bloc of Genuaä, is a largely abandoned industrial sector with aging buildings and several outdated wallrider wide tracks (current standardized tracks and vehicles are narrower and wide tracks were outdated and deemed unsafe). The power is still on in many of the buildings but, for the most part, it's a no man's land with occasional squatters, rouge sendai, and criminals.
Nasford is sitting just on the edge of the border with the larger political bloc of Jaämas, which also has rather sizable expanses of abandoned no mans land real-estate and the criminal elements that can be found occasionally in Nasford often are based there, being out of Genuaä's juristiction. The policers of Genuaä and Jaämas often will cooperate regarding the border situation but policing dimensional borders is difficult. Borders are tricky in general, because Indus is more dimensional in laying out political territories, that is to say it accounts for the 360 degree nature of the purely architectural environment. Nasford isn't really overrun with criminal elements, it's mostly a ghost town but any I.P.I.O.s (Inter-Bloc Private Investigations Organization) or Policer's answering a call in this area would be on heightened alert.
Nasford was abandoned some 50 years back when one of Jeindel's FOIL component manufacturing plants (nobody really knew, even many of the workers, what the components they manufactured did) had a catastrophic leak of a deadly airborne toxin. A huge number of workers and civilians perished. Though Nasford is now safe to live in the incident left such a stigma that it was abandoned long ago to be left to the squatters, criminal elements, and nomadic travelers. It will become the stage that sets a chain of events in motion that begins Badan Song.
Below we have two stages of the shot. The final color image and the base pencil illustration with the shadow augmentation layers turned on. 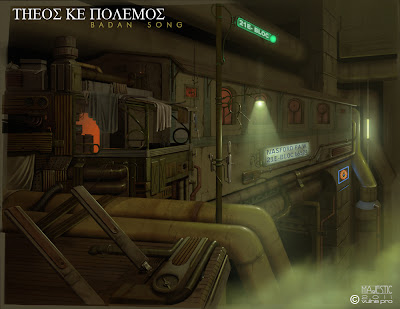 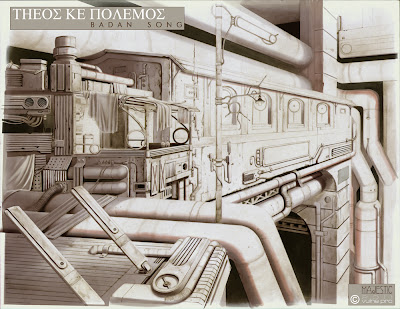 Foundation illustrations have always began as pencil to be augmented/edited digitally.
The color shot is just the background only as there will be a character element to be added in for the final scene. This is the full un-cropped image as the final shots will be in 16:9 widescreen format. Because Indus is a completely enclosed architectural landscape the lighting is artificial. For the Nasford shots I went with a sodium vapor look with the lighting being in amber and green hues. Indus will be lit with a variety of familiar and fictional lights, from the familiar sodium vapor, florescent, neon, and incandescent, to exotic bio-gel and organic bio-luminescent lighting. So, depending on location, Indus will have a rather varied range of hues and lighting styles in the environments though the familiar sodium vapor hues will be one of the most common. The nature of Indus's environment alone really makes it a classic film noir setting thus cementing further Theos's noir trappings.
Although posts had slowed to a trickle to none during the last 6 months (due to my Father's Magical Medical Mystery Tour. Yes he continues to do well) or so it's now time to catch up on a lot of this work and begin to share peeks at things in the works. You'll continue to see TKP concept work (including DA gallery favs the FOILs), work from Badan Song (the nature of the project to be revealed later), and some new TKP stuff developing. It's been a tough year but we're still here, still working, and still excited about creating new worlds.
More to come...
Posted by Vulnepro at 5:53 PM