Although I do have more and more time of late it's still been a fairly busy time since admitting my Father into extended care. I've visited him every day and he's doing really well. He'll be discharged on the 8th, to stay with his brother for a short time before heading home, and is on track for full recovery. That said I've gradually been getting to a heavy backlog of all kinds of work and will be posting a lot of new stuff soon. Here's a peek at what's to come with some new Theos KE Polemos work.
Living on Indus, Polemos, and within the SOL system one becomes accustomed to the ever present watchful eyes of Omnisense, the SOL wide information and optical monitoring network. To the average citizen it's simply a reality of daily living and, depending on level of access, a handy information system. For criminals and covert operatives Omnisense is a problem many solutions had to be devised circumvent it's watchful presence. In order to navigate Indus covertly one has to contend with the ubiquitous eyes of Omnisense so, often, the Omni-cams are hacked or jammed in order to keep your movements discrete. Sendai, especially high end combat taedus systems, are often responsible for Omni-tapping (hacking) into the system. Here we have an example of an Omni-tap (hack) in it's initial stage before the feed is cut: 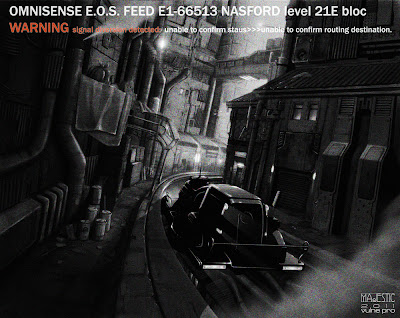 This is a test shot (testing filters to get that cam look. The illo is complete) for the black and white "security cam" look. The illustration is a rendered pencil BG with digital gray scale tones in CS3 and the wallrider vehicle is a digitally inked pencil illustration with cell cut tones in CS3. In this image we have a wallrider truck, of some kind, driving along on it's track system though a very dark and dreary industrial Nasford sector of the political bloc of Genuaä. This shot is from the Badan Song project and is one of many images to come. I'll post an unfiltered image, along with the pencils, etc later. For now I wanted to drop in a post with a peek into the neon, bio-gel lamp, and sodium vapor lit architectural caverns of the industrial planet Indus.
Welcome to Genuaä
More to come...
Posted by Vulnepro at 1:42 AM

Sweet. The grain is a nice touch. Helps to kill the slickness.

Only problem is... do security camera technicians in general REALLY know how to compose an image like that?

While you have a point, to a degree, this is a rather different setting and more aesthetics driven culture than our own anyway so it's not so unusual for such a shot to be more composed than haphazard.

The Omnisense system isn't simply a security camera system but, rather, this culture's form of something akin to our internet (though it's still quite different, just the closest comparison). The Omni cams are all over the place and serve multiple purposes from security to even tourist windows to various locales so placement can be haphazard and very deliberate. They can be fixed, limited motion, or full floating mobile but all linked to the main network. No matter the "public" purpose the over arching purpose is monitoring all of SOL.

It plays a significant enough role in the project that it's purpose has been quite well thought out ;)