This one's been waiting to drop as well due to delays related to my Father's continuing medical situation. He's still doing reasonably well but there are new issues, I won't get into now, that he faces. Hopefully he'll come though this as well but more on that later. Now, on to new work...

The 5th gen Oshen Atha Dharma RES-CM is FOIL design evolution at it's apex. The result of over a century of FOIL development all converging on this bold new direction to meet an even bolder and more dangerous threat than ever before. Once again we have a FOIL with the naming conventions directly influenced by the growing sendai Hindai movement. The Atha Dharma is aptly named wedding the common understanding of the term Dharma, as "duty" with the true meaning of Dharma; natural law. The Faedi face duty with the unyielding honor and Oshen has always expressed design philosophy as "in concert with the natural flow".

Oshen is a company renowned for the finest taedus systems in the SOL system and their highly sought after custom combat FOILs. Any pilot skilled, enough to bond with an Oshen FOIL, as his combat frame, would be confronted with great caution on the battlefield. Oshen had always been a company manufacturing, one of a kind, custom masterworks but the situation that confronted Polemos during the "Siege of the Black Son" changed all that rather dramatically. As the looming threat, that facilitated the evolution of FOILs into the 5th generation, approached Oshen took a proactive leading role in developing the technologies that became synonymous with the 5th gen FOILs. It could be said that Oshen was responsible for the 5th gen evolution. This was the first time Oshen mass produced their products but they did so with no less emphasis on the finest quality and reliability. Although mass produced Oshen's flair for visual design still shines through as mutated deco pastiches are seen subtly throughout.

One of the few mass produced FOILs by Oshen themselves (not including machines made in collaboration with other companies like Dies) the Atha Dharma is an incredibly formidable FOIL. The machine, like the Nal-Farbute (also by Oshen partnered with Dies) is equipped with a powerful RES counter measures sensor array and radome. A common feature of 5th gen FOILs are these new, enigmatic, jamming devices, but jamming what? That's for another time. 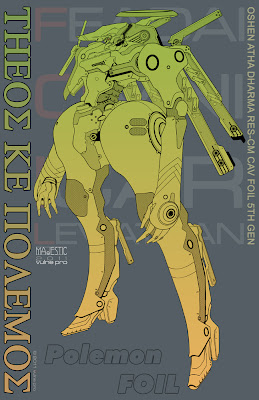 Again, a design that began with a small thumbnail illo that I blew up in CS3 to print out for a tighter light box refinement. From there the refined pencil illo goes back to CS3 for digital ink clean up and fine detail work. This guy is another collaboration, of sorts, between myself and Karl (genocidalpenguin) as Karl actually came up with the forward head design (the head apart from the housing cowl. It can pop out and forward). When I sent him an early WIP he asked, "Can I has doodle?" and I was, "Go for it". The result was the head design so I kept it pretty much unchanged. The rest of the FOIL was my madness, again with the legs owing some cues from Karl's aesthetic sense wed with my own. This one has a lot of hex and perforated textures to imply the new materials common to 5th gen designs. A full color version will show up sometime in the future. More works to come...
Cheers!
Posted by Vulnepro at 8:39 PM