I delayed this post for obvious reasons due to a time of mournful pause in light of the tragic events in Japan. We continue to support Japan in this time of crisis and, again, suggest you donate to the Red Cross tsunami disaster relief fund if you're able to do so. I've also had a busy week taking care of my Father due to his blood pressure being far lower than normal because of  medications he's now off (at doctor's suggestion). He's doing OK now. So... onward to new work...

This bad boy has been a long time coming... the epic Faedai Omni Icar Leviathan beast: Harma Bhatra. One of several delayed collaborations between myself and Karl Östlund (genocidalpenguin) this design is, in every way, a true collaboration of both of us even more so than the, now Vulne Pro Deviant gallery favorite, FOILjaeger 3aMF Gottheitzerstorer. This new design is based on one of Karl's orphaned scrap designs simply titled 'modular mech' (also pictured below for comparison). I had always loved it's look, much like the design that became the Gottheitzerstorer, and during many of our conversations about the Theos material I suggested possibly doing something new with it in collaboration. Karl thought it was a cool idea and agreed so off I went with a notion of seeing what might come out of the exploration.

Karl's original design was clearly a rough he planned to evolve further but didn't get around to it, instead moving on to other work. I've been there more times than I can count myself, I suspect most artists have. What was there was defined enough to launch off of with some really cool new ideas. While evolving my thoughts to paper, as to what it would transform into, it became apparent going with a covered limb style of the 5th gen FOILs would look rather striking on this guy. I altered the torso configuration the least and due to the modular nature of Karl's design it felt like it would be a late 4th generation FOIL with clear visual cues of the movement toward the 5th gen machines. Where Karl's original ends and the new work I did begins is what you will see looking at the two designs. Anything different from the original was where I took it. A list of the significant changes in order to evolve into a FOIL are thus: 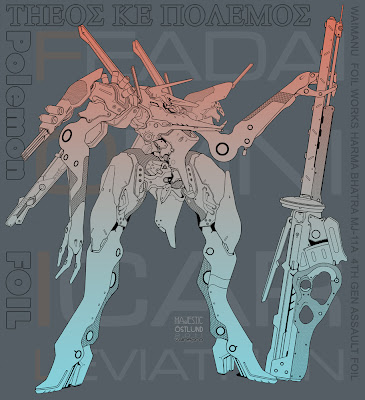 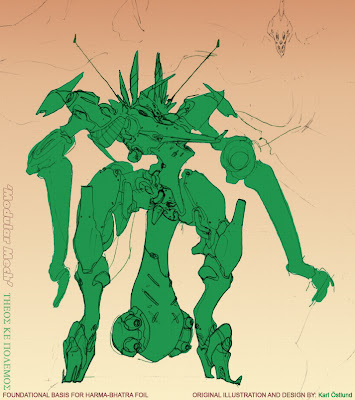 The Harma Bhatra MJ-11a was developed by the Waimanu FOIL Works, the company also responsible for the dreaded Gottheitzerstorer FOILjaeger's of the wildly experimental 3rd generation of FOIL development. There are some clear visual cues that nod back to the Gottheitzerstorer. Though the Harma Bhatra is a very formidable Faedai combat frame it's nowhere near as massive as the Gottheitzerstorer was so the similarities have more to do with the manufacturer's distinct visual design cues than anything. Begining service toward the very end of the 4th gen period the Harma Bhatra might as well have been a 5th gen. Clear design cues point to what was to come in FOIL development; the covered limbs with equipment ports for customization, the appearance of enigmatic sensor equipment, the more streamlined aesthetics. The FOILs were changing before   anyone, not in the know, knew why. Change was on the horizon as the sendai moved more, and more toward spiritual and political concerns, more freedoms. As such the Hindai movment (derived obviously from Hinduism in name and some core concepts but also having aspects of Buddhism and Taoism as well) spread and it's influence began to inform the naming conventions of the FOILs.
To say that this was a blast to work on is an understatement. Karl's original design was a fantastic foundation to launch from and I'm grateful and happy he both agreed to give this a go and utterly loved the end result. In discussing the notion of our personal styles having distinct visual cues I suggested he create a FOIL manufacturer name that would define his designs and he came back with Waimanru (look it up, it's rather apt). In naming the FOIL we both threw around some ideas but, I eventually landed on Harma Bhatra MJ-11a, the MJ referring to a specific FOIL artisan that had a hand in this design (me). As with the Kharma Actura the Harma Bhatra's name, within the Theos setting, is due to the growing influence of the Hindai movement on the Sendai community. In later posts I'll dive into the Hindai movement further. More to come...
Cheers!
Posted by Vulnepro at 7:26 PM

Thanks man, appreciate it :)

Epic weapon man! And I'm really glad you find time for yourself to draw still, even though you're taking care of your father :)

Thank you for the kind words Chris :) Yeah, been pretty busy taking care of him but I don't mind. I expect things to calm down a bit at some point so there will be piles more work to drop eventually.