As I had noted in previous posts we intend to publish more and more peeks at art, on the blog, that hasn't gone up in any of our Deviant galleries. We plan to share peeks at process, roughs, and work like those below; classic model sheet line art. With this posting I thought I'd explain, in a bit of detail, why I have approached the presentation of the Theos KE Polemos art in the manner I have.

When I was young there was a comic shop, called Comic Kingdom that used to be on 7 mile and Gratiot Ave. in Detroit. I, actually, don't remember how we found it but my Father would take me there, on weekends, so I could sort through the impressive collection of Macross, Dougram, Orguss, and Gundam kits, at least it was the fact they carried such kits that led me there (my Father bought me a bunch of the Revell Robotech kits the X-mas of 84 and I was hooked). However, it wasn't the kits as much as the discovery that this little Comic shop also carried anime art books and magazines, straight from Japan. Back then it was just really cool animation to my eyes, something new and exciting. They were doing things I had never seen before with the medium of animation and for a young artist the idea of such creative freedom with "moving drawings" was immensely impressionable.

I remember always being excited to see previews in the magazines or getting the actual artbooks of these fantastic films soon to hit theaters in Japan, films like; 'The Wings of Honneamise Royal Space Force', 'Akira', 'Castle in the Sky Laputa', and 'Venus Wars' (this was during the late 80s so that does indeed make me very old school). All films that STILL to this day I find as impressive as when I first saw these previews in Animedia, Animage, or Newtype. It was always seeing those previews of screen caps, background art, or cool peeks at model sheets and such that sparked my imagination. Even more impressionable was the fact that the cool fellow who ran that section of the shop, Bill Sikoro (not sure if I have his last name right but I do wish to extend my thanks for encouraging a young upstart to follow his dream of making his own works) would have showings of these films as they got them on Laser Disc, and, usually, it was within a month or so after release. I saw Akira on LD, like right after it came out in Japan. So all this stuff really inspired me to both strike out on my own creative ventures, but more importantly to pursue my own original creative voice. Seeing all the imagination in those films, back then, ingrained a drive in me to settle for no less than my own original vision and I've had no interest in aping anyone else's work since. I find it FAR more rewarding to strive for something I haven't seen while honoring the works and genres that inspired me in my youth.

Well, many, many years later and I'm producing my own work with that spirit in mind. My approach to presenting much of the Theos art has been designed to evoke those days of seeing all those previews for some anime film, or project, that just grabbed you with wonder, or some cool box art for a plastic/resin kit.. Back then you wanted to see it because it looked wild, imaginative, thoughtful in execution, or just plain cool... impressions I sense less and less in current anime offerings (though there are still some impressive works produced to be sure). The TKP art is presented in a manner to, hopefully, achieve that same sense of wonder, like seeing those previews, back then, before the internet and the tidal wave of media we have today. The FOIL art has especially been tailored toward a sense of seeing some old school box art for a cool resin or plastic mech that would catch your eye. Seeing as how I've had a few people tell me the art gave them that impression it seems I've succeeded in evoking that vibe. Eventually we'll need those FOIL kits in our hands for real, but for now we have the art to inspire that path forward.

Below are the line art works for the Nal-Farbute and the Strumgeist 5th Gen EVO. These line art presentations will go up here first, then later to DA and Pixiv. 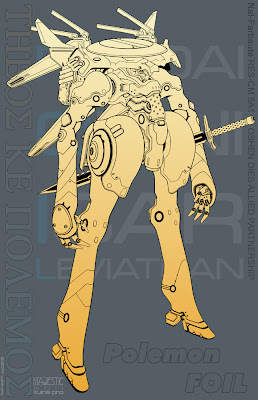 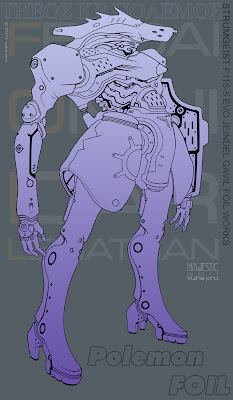 Comments are welcome and feel free to stay a spell. More of these to follow soon!
Cheers!
Posted by Vulnepro at 9:41 PM

Comic Kingdom was also the place I bought my first anime videocassettes in the late 80's! That place was really ahead of the game- but not the nicest part of town. That feeling of discovery and wonder at seeing Japanese animation and art styles for the first time is embedded in me forever.

Hey there Pete! Nice to see you drop in :)

Aye, I remember us talking about Comic Kingdom during our tour of duty at Borders. It really was THE place to go for anything anime at that time. The only place that compared was later Masquerade Games and I believe that place folded. Bummer there really aren't any places like that anymore as it was fun just exploring whatever new stuff would arrive from visit to visit.