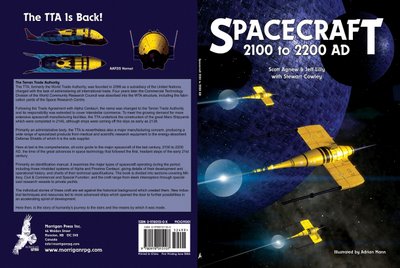 It was Eleventh Hour at TTA HQ. The new Spacecraft 2100-2200 AD had gone to press. The writing and artistic crews set their sights on finishing up the RPG book while K. Scott Agnew, president of Morrigan, went on a well-deserved family vacation.

On May 9, Scott returned to the office to find a message from Stewart Cowley, original author and compiler of the TTA books, in his inbox.

“Great!” He thought. After all, we at Morrigan had been trying to contact Mr. Cowley for months, hoping to include him or at least get his stamp of approval on the new material.

Then Scott read the message. There was a problem.

When Morrigan originally sought to license the TTA franchise, Scott approached Hamlyn Publishing, which asserted that it owned the rights to the TTA books. A deal was negotiated and advance royalties paid to Hamlyn.

In his message, however, Mr. Cowley asserted that he owned the copyright on the TTA books, and in fact had been the holder of said copyright since 1990.

A flurry of phone calls and e-mails later, it was confirmed that there had indeed been, to put it mildly, a slight oversight. Mr. Cowley did own the rights to the books. Hamlyn had somehow misfiled or otherwise overlooked this fact, and so had licensed a property that they had not owned for sixteen years.

I’ve got a bridge here, by the way. Nice bridge. Real ornate. It’d look good spanning whatever river you choose.

The contract was dead. Hamlyn returned the royalty money. The presses were stopped. And Scott and myself were busy searching our local areas for nice, high cliffs to drive off of. Was six months of work about to go up in smoke?

Well… it’s a wonderful thing in life when one of your childhood heroes turns out to be a jolly good fellow...

Mr. Cowley immediately made it clear that he had no wish to obstruct the project. He let us know that he was certain that everything we had been doing was in the true spirit of the original books. Once he had made sure that we weren’t some wildcatter organization attempting to rip him off, it was clear that there was the matter of a new deal to be forged… which it was.

The bottom line: Stewart Cowley is officially back in the TTA saddle! He’s aboard ship, back on the command deck, and will be contributing to future TTA releases. Best of all, everything from here on out is going to have the official Cowley blessing and seal of approval.

So this heads off any criticisms of expanding the canon... as well as giving me an opportunity to work with one of my childhood idols. All things considered, I think things worked out better than could have possibly been imagined... especially since Cowley could have, at any point, just said "no." He could also have very resonably demanded to have complete oversight, or to put the whole thing on hold until he got some of his people in the mix. He didn't. He trusted us, and he liked what we had done... in a similar situation, I don't think I would have been so understanding. He was, and now the project continues, stronger than before...

More to come!
Posted by Hatrax at 1:44 PM No comments: