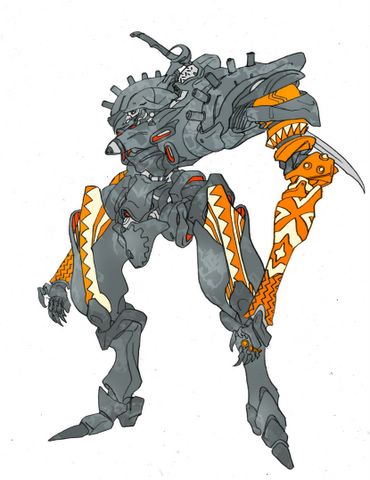 Germane Klau-Faus JF 5 FOIL: This is Karl's first original FOIL concept for Theos Ke Polemos and it fits like a glove into the already established aesthetics yet still retaining his unmistakable style. The machine was unnamed (though honestly names have been changed when appropriate with some of the designs for Theos, thus tentative. Faus is a mutation for Faust, something again typical in this setting's fragmentary history) but as I continued to look over the design it's quite fitting for a machine made by the fictional political bloc Germane, a futuristic derived Germany with no real connections other than fragmentary to the original Germanic peoples. Original concept, illustration and colors Karl Östlund. The Basilea Project Theos Ke Polemos © 2006 Vulne pro.

Quite fab they are. He went that route after I told him about Wings of Honneamise and he finaly got to see it. So I guess a little Wings got in there but it also fits the vibe that was always there, very tribal and artisan infused aesthetics. There are even crazier, yet stil fitting, things to come though from both of us.