This update was supposed to go up Thursday, April 28th, the day after the photo shoot all the images below are from but it's been a crazy busy week and I couldn't get to posting till tonight. We had another extensive photo scout of Detroit on Wednesday, April 27th and more interesting things seem to make themselves known about this city as we go... no it's more like the city is talking to us, compelling in various directions of thought and ideas. The weather forecast Wednesday was for possible showers. In the past we had postponed shoots due to rain but I told Jeff I wanted to get shots of the city under various conditions and lighting so we ventured out anyway, I'm glad we did it was a good shoot. Indeed the weather was sporadically rainy and we had anything from gloom to sun and back again, say yes to Michigan folks! The digital Mavica shots came out pretty well considering it's not a very good camera and I imagine Jeff's 35mm shots will be even more impressive, as they always are.

This time round we visited John King briefly and then the Guardian again to give Christopher, the building's concierge, a few 35mm photos Jeff took of him from the last shoot. At this point we decided to just wander about the city exploring and shooting as we went. The more I look over the city, like this, the more it's classic 20s and 30s architecture, a great deal art deco, is becoming apparent. Detroit is a very old city, in the visual sense and that said is very evocative of a classic film noir setting. I'm also realizing that the look of the city is something that, once I add the elements of the "future" setting that aren't there (a process already underway) the resulting look will clearly have a classic dystopian cyberpunk neo-noir look similar to previous imaginings like Blade Runner, Ghost in the Shell, Akira, etc, etc. This is not to say I plan to copy those films it's simply what you end up with if you approach it with a sense of what a city might look like with certain economic, political, and social conditions shaping it's future. Basically Detroit kinda already looks like these films without adding any future flourishes. Much of the cities old classic architecture mixing with the modern is VERY similar to Ridley Scott's Blade Runner, there's that feel already there. Let's take Zug Island for example (sadly this is one of the few pics online, trust me this industrial wasteland is much more impressive than this little pic. You simply have to see it to understand), it's like Blade Runner for real. Detroit is also a very surreal city as you'll be looking at a building that's clearly occupied and in use and then right next door you'll see the vacant husk of an abandoned skyscraper, it's eerie to say the least. This project is turning out very exciting for everyone participating and seems to just continue to involve and inspire new ideas. The artwork is coming soon so stay tuned folks.

Our friends Davecat and Gina Stevens were supposed to come for the shoot but unfortunately they had to both take a rain check for the next shoot (appropriate with the crazy rainy GTA weather). We missed you guys coming along so the pics below are for you, it's like you can be there, only smaller and flat-2d low-res-grainy-Mavica-digital-action and stuff.

One more important bit of news, on the front of EBEJEEBIES something has been brewing, in the background, with the property that will potentially propel them into the big-time, so to speak. At the moment we're not at liberty to disclose the full details but I will say this, it looks to be something exciting for the parties involved. I also are still adding subtle changes and updates to the site as I go, I'll add notice of big changes here in the blog when they're posted. I imagine Jeff will chime in with the updates soon as well seeing as how his semester of school is over for the moment, we both have a lot to do. Until next time keep watching those skies!
Posted by Vulnepro at 12:59 AM No comments: 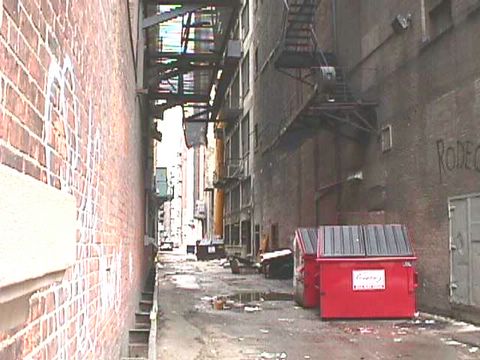 Yet another alley, still damp from the rain that had been falling off and on that day. During the shoot Jeff had jokingly said it was like Grand Theft Auto weather and it was, changed every other 15 minutes it seemed. 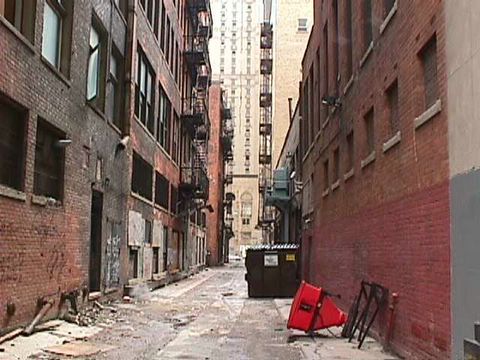 One of the many grimy alleys in Detroit, something you certainly see in just about any city but always seems to evoke the classic noir imagery. 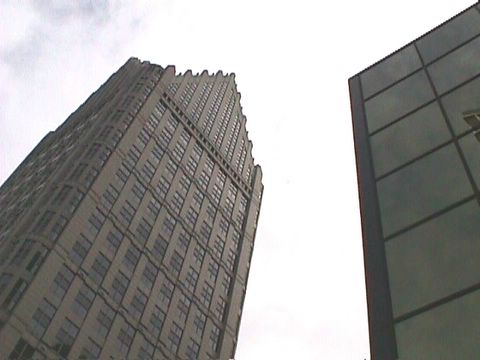 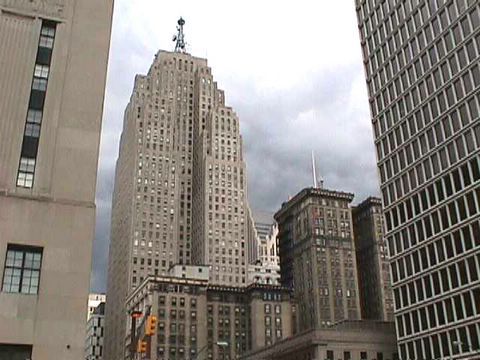 Another shot of the Penobscot with the Comerica Tower just behind it to the right. It was a pretty gloomy day Wednesday but it added to the atmosphere of the photos. 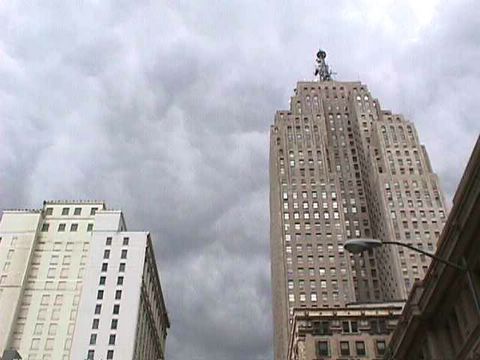 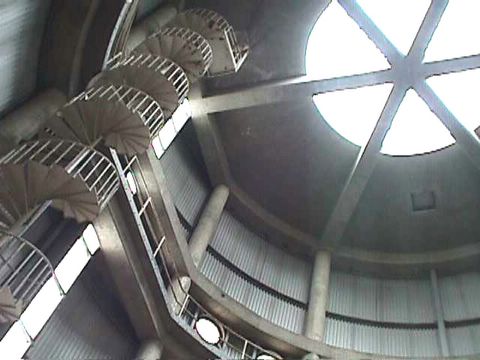