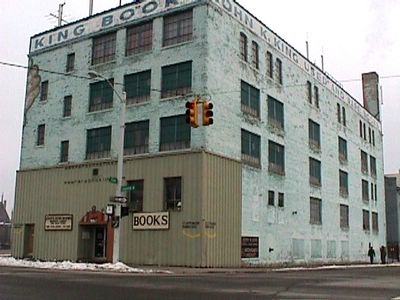 A Photo of John King Books from our first photo session. This simple looking building is probably going to be the most important location set in the story. As Jeff and I began discussing the “Cricket Song” project he decided he’d like the main characters to live in John king, sounded cool to me. That decided Jeff went to John King and ran the idea by John King himself (the owner obviously) of the store being a location set for a sci-fi animated TV project, Mr. King was genuinely excited and gave us full access for future photo shoots. Once Jeff, Davecat, one of Jeff’s friends Simon, and I actually went there for the first photo shoot I was sucked into all the little details that are so unique to the building, it screams personality and will look fantastic as BG paintings in animated form. It’s an old building, a glove factory from 1912 as Jeff pointed out, and as such has all these fantastic touches of that era that adds to it’s unique atmosphere, let alone the fact that it’s a bookstore, an interesting thing in itself. As unassuming as this building looks it's loaded with more character than I imagined it would be. The rough CG concept art of John King Books I posted last month was rendered before the photo shoots so it’s not anywhere near what my final designs for the futuristic version of the store will be. Overall it will remain the same with many subtle and obvious additions that will reflect the changing times up until the stories date of 2042.