One of the challenges of writing EbeJeebies is the limited length... usually six panels, sometimes seven. Someone wise once said that it is harder to write a good short story than a good novel. While a novel has a lot more material to actually write, of course, the short story has the exact same narrative requirements and basic structure, but with a lot less space to introduce the characters, establish the setting, unveil the conflict, build to the climax, and have your resolution. Anyone can pack an upright piano into a semi trailer... now try cramming it into a Volkswagen Bug.
I'm being a bit tongue-in-cheek here, of course, but it holds true to some extent with the comic format as well. Twenty to twenty-four pages gives you room to roam, while six panels can be confining. In the opening strip, for example, I had to introduce these three idiots, their mission, their destination, and get across the fact that they are not entirely to be taken seriously... not to mention throwing in their supreme being / commanding officer. I also had to make it funny...
Then Mike has to come in and take my script and any nutty little stick figures I drew and make them into a dynamic panel... which presents its own set of problems. Then we send it zinging off into the ether in the hopes that you and others like you will get a chuckle out of it. We hope you do. Drop us a line or post a comment to let us know what you think!
Posted by Hatrax at 8:54 PM No comments:

So where did EbeJeebies come from, anyway? Well, Mike and I have long taken an interest in the whole alien phenomena... whether we believe it or not, and to what extent is not the main thing here (though I can tell you, Mike and I have had a lot of long, rambling, sometimes heated discussions about it)... but we both agree that the thought of it is fascinating. What if we are, indeed, being studied? What if we are nothing more than antelope under a researcher's dart gun? Hmmm... Some people think long and deep on the implications of it all... we just went for the humor of the situation.
I met Mike in 1991, and even then he was drawing goofy little Grays. We put out a comic in 1994 that featured some of my characters, plus Mulder and Scully from the X-Files (at that time, still a small, fairly unkown show that we were certain would be cancelled)... plus several Grays, one of whom was named Zax. Other stories were planned, but never gotten around to... at this time, our friend Tim coined the title. Fast forward to early 2003. I was back from six years in Japan, and Mike was launching a new look for the old idea... after nine years of back-burnering, EbeJeebies was finally born.
By the way, I'd like to give a hearty thanks to all of you who checked out the site after the "19.5" post hit coasttocoastam.com... we've recorded over 5,700 hits in the past two days!
I'll be back with more on EbeJeebies and the other projects here at Vulne Pro. As always, comments and questions are more than welcome- just hit the comment button at the bottom of the entry.
Posted by Hatrax at 1:49 PM No comments:

And Now, A Word From Our Scribbler...

Hello everyone, and welcome to RoToRs. I'm Jeff, writer for EbeJeebies and some other VulnePro projects. I've been a part of VulnePro for umpty-ump years, enjoy long walks on the beach and those drinks with the little umbrellas in them. Or maybe it's just the little umbrellas I like... in any case, welcome and thanks for checking us out. I hope to have lots of extraordinarily fun drivel posted here for you all to enjoy. Take care!
Posted by Hatrax at 7:33 AM No comments:

Welcome to the online news site for Vulne Pro, a small animation development studio with some good stuff baking in the oven.

Something a little different, RoToRs will now become the new source of updates and info for all things Vulne Pro and animation related. Vulnepro.com has been on the web for some time now and in it’s original iteration the site had a news/reviews section called RoToRs. It was something we wanted to continue but got lost in the revamp and personnel changes to site contributors. With some discussions about blogging with some friends, and my understanding of what blogs traditionally are, news sites, I thought this would be a great way to revive RoToRs and a far easier thing to manage overall. Slam Bam Hazoo (I have no idea what the hell that means) here we go and tonight it goes live with the first update.

We hope you enjoy your visit to our little studio on the wild and wacky infobahn. Those of you familiar with EBEJEEBIES are likely stopping on by from the website of our good friends at the ever growing phenomenon that is Coast to Coast AM. EBEJEEBIES started as just a fun thing to, "give it a go", and since has been pretty well received, and has been quite a lot of fun to do. Although we can't turn them out as fast as we'd like, ala a weekly deal (we have a lot of things going on here in the little studio) I assure you we will continue doing them. New full episodes are coming again very soon. Well tonight Coast to Coast AM.com has posted a one panel gag I did specifically for Richard Hoagland to coincide with his appearance tonight on the show. As always, my infinite thanks to Lex and the fine crew at Coast.

Also I want to post a peek at a new project (image below) cooking in our easybake oven, its’ working title is simply Cricket Song, a futuristic tale set in our hometown Detroit, Michigan circa 2042. It’s evolved into another full TV series proposal and has been cooking at a hurried pace. This project, EBEJEEBIES, and Theos Ke Polemos will be appearing more in the future on the site. For now, here’s one of the very first concepts, a rough and dirty CG piece, just something to lay down a feel for the project. Nothing here is set in stone except John King Books being featured as a location set.

Posted by Vulnepro at 4:09 AM No comments: 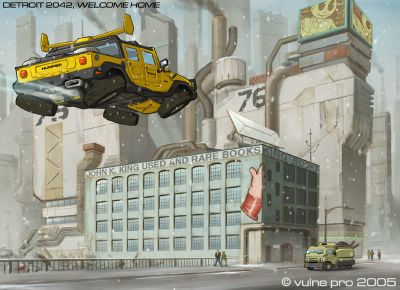 Flying Hummers, who'd have thunk it? A little Metal Hurlant flavor for you folks.

Posted by Vulnepro at 4:07 AM No comments: